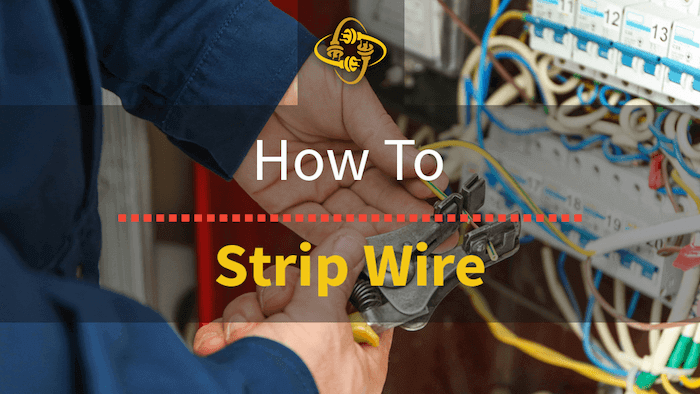 While doing any kind of DIY electrical work, you’ll frequently find that you need to strip the insulation off of the wire you’re working with. Clean and accurate wire stripping is essential to ensuring safe electrical connections.

When stripping wire, you might be tempted to use a knife, the cutting jaws on lineman’s pliers, needle-nose pliers or even using scissors. Don’t! I know how tempting it can be, but the sharp cutters on those jaws can create a score line around the wire, making a weak point where the wire can snap off. Not to mention the fact that it’s more dangerous that way.

Get yourself a good set of wire strippers before you start (they’re less than $20). It’ll make the work safer, cleaner, and faster. Once you’ve got a pair – you’re good to go.

How To Strip Wire:

What is a Wire Stripper?

Wire strippers are tools used to remove the insulation from electric wires to create contact with the inner conductors. Wire strippers can be either manual or automatic based on the wire used in the project.

Manual wire strippers have opposing blades, like a standard pair of scissors, but has a notch shown in between the blades to place the wire. The stripper is rotated around the wire, so its outer insulation is removed while keeping the main wire intact.

Some wire strippers have various sizes that allow you to remove wires in different AWGs without twisting. There are also automatic wire strippers. They have one side to remove the insulation and another side that cuts the wire. Make sure to use a good insulation resistance tester if you need to measure the resistance of your insulation.

While automatic wire strippers reduce the effort needed, it can accidentally break thinner wires, so they aren’t necessary for most applications. When searching for a wire stripper, look for one that can easily remove the insulation from a wire, has a comfortable grip, and can keep the wire fully intact.

Alternatively, you can use a pair of scissors or a knife to strip wire — scissors work when you have no knives at your disposal. Using knives or scissors is a time-consuming process, and it’s easy to accidentally cut the wire you’re working with if you don’t know what you’re doing. It’s also a lot more dangerous, so make sure you’re wearing a set of good electricians gloves to protect yourself. If you’re having difficulty using a knife – you might find it a lot simpler to use a wire stripper instead.

If you notice that finding the right cables and wire is starting to feel like a long (and frustrating) game of hide and seek, then consider grabbing a good electrical circuit tracer or tone generator and probe.

The most common types of wires are:

Triplex Wires are used for single-phase service drop conductors. They are made out of two insulated aluminum wires and a third bare wire that’s used as a common neutral. The neutral wire is smaller and is grounded at the transformer and the electric meter.

These wires are used to connect the service weather head to your house. They are created out of THHN wire and use up 25% more than its actual load.

The best coaxial cables are copper-based wires that have 4 separate layers. There is a wire conductor placed on the center of the cable. Usually, coaxial cables are used for video and audio purposes;  such as connecting a VCR to a television.

As its name suggests, chicken wire was invented to prevent poultry from escaping. It’s made out of galvanized wire, which makes it resistant to the elements (rain, rust, etc.). Besides being durable, chicken wire is flexible and can be easily cut.

These wires are used in most homes and consist of 2-3 conductors. Each conductor has a bare ground wire and plastic insulation. Since its cheaper, and has ratings for 15, 20, and 25 amps, it’s more suited for DIY usage.

The most common wires you’ll meet are solid and stranded wires. Solid wires are made out of one piece of metal (strand). One of the most common forms of solid wire is called the wire wrap. Make sure not to bend the wires as it could cause solid wires to break.

Stranded wires are made of multiple wires and are bundled into one group. They are more flexible than solid wires but are more expensive. Since they are more likely to experience corrosion, extra care is needed when using these wires.

How To Make a Wire Stripper

Did you know that you can make a wire stripper using only a pencil sharpener and a wooden clothespin? It only takes 3 steps!

How to make a wirestipper: