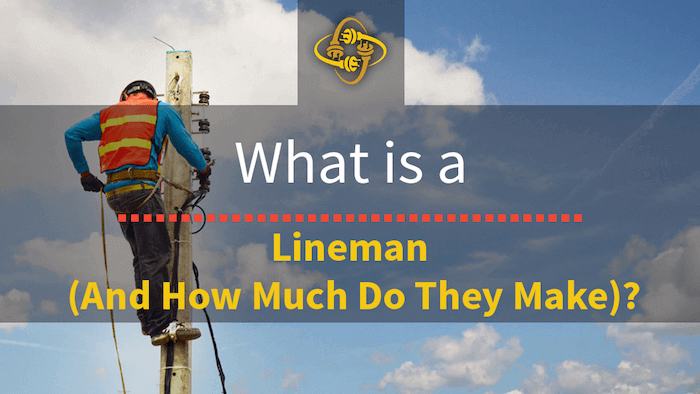 What is a Lineman (Lineworker)?

A lineman (also known as a lineworker, linesman, powerline worker or powerline technician) is someone who installs and repairs cables or wires used in electrical power or distribution systems. A lineworker’s work may include the installation and maintenance of telecommunications lines (cable, internet and phone), telegraph, or electric power lines.

A lineman will usually work for energy companies, telecommunications companies, or utility companies. They report to a group of supervisors or managers who ensure that the electrical lines are properly installed and maintained.

Daily responsibilities of a Linemen include:

How To Become A Lineman

When deciding on becoming a lineman, there are two options:

We’ll dive into both options so you can find out which one best suits you.

What is Lineman School?

A lineman school (or lineman college) gives future linesman the knowledge and understanding of what a lineman does before applying to an apprenticeship. Budding lineman learn how to climb poles, how to use the tools of the trade, and learn day to day tasks of a lineman.

You don’t need a formal degree from a college or university to become a lineman. For those who don’t want to pay thousands of dollars to pay for college, or aren’t interested in taking the “college route”, becoming an electrical lineman is a great option.

How Long Is Lineman School?

The California-Nevada Power Lineman Apprenticeship Program is a four year “earn while you learn” school consisting of a minimum of 7,000 hours of on-the-job training and related academic classes. This gives you the option to spread out your schooling over a longer time period.

Even though lineman well paid, it’s important to know how much lineman school costs. This can vary from school to school, so we’ve compared some of the most popular lineman school’s fees in the table below (all numbers are in $USD):

*Note that we have included the lineman school’s “Lab Fee” in the Tuition Fee where applicable.

† The California-Nevada Joint Apprenticeship Training Committee (JTAC) has stated that:

“There are no out-of-pocket tuition costs associated with the California-Nevada Power Lineman Apprenticeship Program. All tuition fees ($12,250) are waived if you work for a contributing contractor for a period of five years or 8,000 hours after completing step six of the seven-step program.”

Although they state that “apprentices are required to provide their own hand tools and climbing tools.” See their website for more information (alternatively we have guides on the best wire strippers and list of tools that you may find useful).

To become a lineman apprentice, you must:

Depending on where you live, some JATCs have additional requirements such as a grade of C or better in algebra and a Class A CDL (Commercial Driver’s License). Once you apply to an apprenticeship program, you will have an interview and safety orientation before being paired with power company linemen and starting your on-the-job training and classroom instruction.

Another way to start becoming a lineman is by contacting your local contractor.

You could either cold-call them by opening your local yellow-pages and giving them a call. Or you could ask your family and friends if they know anyone working as an electrical professional. Even if they’re not a lineman, they have a much higher change of knowing one.

Once you get on the phone with a lineman or a lineman contracting company, ask them if they are accepting any apprenticeships.

To get into one, you’ll generally need a high school diploma or a GED. You can increase your chances substantially by studying at a 2-year community college majoring in electrical distribution theory.

Once you’ve been accepted for a lineman apprentice, you’ll go through a 7-year apprenticeship to before become a full-time lineman.

Is Being a Lineman Dangerous?

Yes. Lineman are listed in the top 10 civilian occupations with highest fatal work injuries according to the Census of Fatal Occupational Injuries conducted by the US Department Of Labor. This doesn’t mean that something is guaranteed to happen to you working as a lineman – but it’s important to be aware of the potential risk involved.

Working with high voltage equipment can be dangerous, so you need to ensure you are competent, well trained, wearing the right protective electrical gear (including good safety glasses and electrical gloves), fit for work, and focused on the job at hand.

How Many Lineman Die a Year