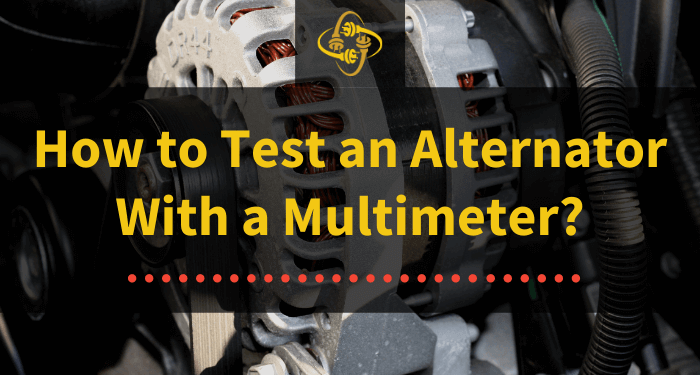 This blog post will provide you with instructions on how to test an alternator using a multimeter. If your car battery is not charging, then the first thing you should do is check your battery and starter voltage. This can be done by attaching one lead from the multimeter to each terminal on the battery.

The next step would be to measure the voltage drop across various parts of your electrical system until it’s found where there is a problem for you to fix it.

When you have to test an alternator on a car, it can be not easy. This is especially true for beginners who are unsure which wires go where and what each wire does.

Fortunately, this guide will show you how to use a multimeter to test your alternator if you’re unsure of the process.

Signs of a Weak Alternator

Before you test your alternator, here are some signs that it might be failing:

You may be wondering why your alternator isn’t charging the battery. If you suspect that it might not be related to issues with an alternator itself, then make sure to check for other problems such as bad wiring connections or a faulty PCM (or power control module). Alternators aren’t infallible, and there are many reasons they can fail!

If you have a voltmeter, it can be used to check for faults in the connections of your engine when it is running.

To perform this test correctly and get accurate results from the readings on your meter, make sure that there are no resistances in any connection by touching both positive and negative leads across each one while testing voltage drop with an electrical probe. Ideally, if everything checks out, the reading should stay at zero or less than 0.1 volts (ideally).

If not careful enough, though, during these tests and throughout other maintenance procedures like hooking up fuel lines- leaks may occur, causing gas fumes directly into areas where they could ignite first thing leading to explosions without warning!

Poor ground connections can result in low charging output, which will lead to your alternator failing prematurely. Make sure that you are looking for voltage drops at the positive and negative battery cable connections and BAT+ power connection of the new alternator.

If the old alternator passes the tests, you’ve missed something. It’s time to get out your voltmeter and check for voltage drop in the battery and charging circuit.

When a new alternator is installed, make sure that before returning it to your customer (and they drive off), plug-in their car using a battery charger so that all of its electrical systems are fully charged up again first – including both engine computers as well those onboard diagnostics which could be giving false readings if not correctly reset after an alternator replacement.

With the engine on:

When using a multimeter to test an alternator, the output tone of voice should be Helpful. This is because once you have established whether your alternator is working well or not by reading any voltage at all (14 volts) and if it’s over 15 volts, then that means there might be something wrong with the regulator on top. At the same time, anything under 13 will require some more testing for other possibilities as to why this may happen, such as engine idle speed being too low.

If the voltage is still too low, check to ensure all of your connectors are tight and that the alternator belt doesn’t slip. The problem can also lie in a faulty regulator or an underperforming alternator itself – it’s time for replacements!

The battery should read 12 volts or higher to charge. Suppose the alternator is putting out too much voltage. In that case, your acid will likely boil over and damage the car’s wiring or irreparably harm both engines of a diesel engine vehicle that uses two batteries.

When you are charging an electrical system with more than one battery (most vehicles have 2), it can help if they each receive fresh juice at different times from opposite directions so as not to overwhelm either bank; this way, they’ll be equally charged when their time comes up again for use.

It is helpful to test at the battery terminals with the engine off and then turn on your car. If you’re fully charged, it should read about 12-13 volts when your vehicle has been turned off for a long time. But if the voltage drops below 10 or 9 in cold weather (depending), the chances are high that there’s maintenance needed or replacement needs to happen soon!

If your battery isn’t charging correctly, it may be time to enlist the help of a professional mechanic. The alternator is one part that could cause this issue, and if you have any other warning lights or notice issues with electrical systems in your car, bringing them to a pro can make all the difference.