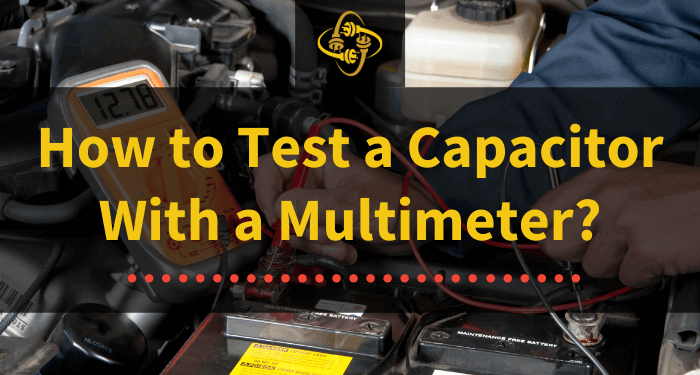 A car battery is an essential vehicle component, providing power for everything from headlights to air conditioning. If your car doesn’t start, it’s time to check the battery. Here are some quick tips on how you can test your car battery with a multimeter.

It’s essential to know how to jump your car or replace a battery. For example, if you forget that the lights are on and leave them all night, it might be because of an issue with your battery! A simple test can help find out whether this is the case before replacing expensive parts. But what about when there isn’t any obvious reason?

You’ll need tools for jumping the car as well as determining if a new one needs replacement – luckily, these things aren’t too difficult, but knowing precisely what part works best will make sure everything goes smoothly in fixing up cars from here on out.

The Right Volts in a Car Battery

An excellent healthy car battery should register about 12.6 volts. Due to the way batteries can be drained, you must test your battery after resting for an hour or more to get a better idea of what’s going on with the health of your vehicle and its power supply.

Leave the car overnight so as not to exacerbate any problems before testing first thing morning when you think all will go according to well without interruption from other factors.

To test a battery with a multimeter, make sure you can access the terminals (the metal connections on top of or at the front of your battery).

Batteries are found in the engine bay. They are usually on one of the sides of your car’s engine and will be obvious when you open up your hood. If it is not immediately visible, consult with an owner’s manual as they can show a clear picture of location specifics.

Modern cars often have battery covers that unclip to allow access or require bolts/screws to remove before opening – some may even have plastic coverings over their terminals like positive (+) ones, which lift off easily too!

Testing a Car Battery with a Multimeter

The first step is to locate the vehicle battery (consult your owner’s manual) and determine any dirt or corrosion at the positive and negative terminals.

The positive terminal usually wears a red cover with a “plus” sign, while the negative terminal has a black cover with an “-.” Since corrosive buildup can keep you from taking accurate voltage readings, it should be scrubbed off using fine-grit sandpaper before proceeding further.

Gloves should always be worn when dealing with batteries to protect yourself against harmful chemicals that might get on your fingers as well as acid burns. Once all of this work has been completed correctly so far, then both covers will serve their purpose by becoming connection points for two probes where electricity can flow through.

A multimeter is a device that measures the amount of electricity flowing through an electrical system.

The voltage across two points in this circuit can be measured with your trusty multimeter, but before it’s even plugged into anything, you’ll need to know how much current you’re dealing with! For testing from vehicles (like cars), turn the dial on the meter to “20 volts” and make sure all surface charges are removed by turning headlights on for about 2 minutes then off.

Now plug one lead of the probe–or test wire–into a ground terminal post or bolt head at engine block near battery connection point; now touch another end of probe onto positive (+) terminal post or bracket — careful not to short out any wires if using probes instead -.

To check the battery’s voltage, use a multimeter with two probes: red and black. The positive contact probe is for touching terminals on the car when it’s off and not running while you are checking its condition.

If your reading is 12-12.6 volts, then there should be no problem starting up your vehicle; however, if this falls below 12 volts, then either charge or replace it soon as possible because that usually means dead cells in the battery, which will need replacing eventually anyways!

Once the resting voltage has been determined, it is time to get a reading on the crank cycle. This can be done by turning on your car and immediately taking a voltage reading with an analog voltmeter placed across both terminals of the battery (the positive and negative).

If this readout falls below 10 volts at any moment, then you may need to recharge or replace your battery; however, if it stays above that number throughout starting up the process when under all load including starter motor draw- meaning no less than 12 volts for first 3 seconds after starting the engine -then there’s not as much worry about charging/replacing batteries.

When you turn on your car, it will idle and maintain a steady draw from the battery after the crank cycle is complete.

The multimeter rating should stay in the 14 to 14.5-volt range if there are no issues with either of these components – which means that your alternator is doing its job! Alternators generate energy for vehicles when they’re running, so make sure yours doesn’t need an upgrade or replacement soon!

Alternators are a vital part of cars’ electrical systems, but they can also be hard to test. A multimeter is often used for this purpose, and the right equipment must be available before beginning any tests.

To start, you’ll need an alternator that has been removed from the vehicle so as not to produce false readings; make sure your battery terminal connections are clean beforehand because corrosion will affect their conductivity too much while testing them with a multimeter.

Make sure all lights (headlights included) and other accessories in your car have turned on – these draw more voltage than usual when running off the alternator instead of a battery alone! You don’t want anything interfering during measurements or hindering accuracy at best-case

The most obvious sign of a low battery level is slow cranking when attempting to start your vehicle. In worse cases, there may be no cranking at all.

If you have problems opening the car door or if it takes longer than usual for heated seats and electronic defrosters to turn on, these could also signal trouble with your car’s power supply–especially in vehicles that are equipped with remote keyless entry!

If your battery is dying, and you are certain there isn’t an electrical problem with the car or its charging system, then a new battery will most likely solve all of these problems.

If that doesn’t work out for you, one suggestion would be to try jumpstarting the vehicle from another source – this could provide enough power until either your alternator starts working again or someone else can give them a charge at their home/business.

Keep in mind that just because our cars don’t start up when we need them does not mean they require replacement first! There may be other factors causing issues such as not frequently driving enough (even if only short distances), long periods without use, on transportation difficulties like bad weather conditions.