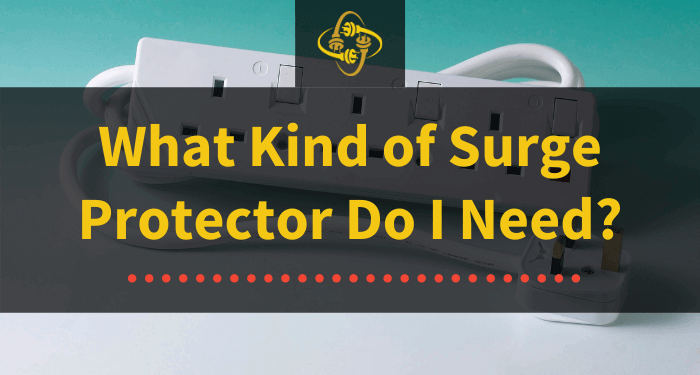 If you’re an electrician or work in the electrical industry, it’s essential to know how to protect your equipment from power surges adequately.

However, with all of the different types and models on the market today, it can be hard to determine which is best for your needs.

That’s why we’ve created this article to help answer any questions you might have about surge protection.

The first thing that you need to know is what kind of surge protector you need.

Surge protectors are designed to guard your electronics from potentially destructive electrical surges and spikes. The protector will disconnect the power supply when a surge or spike is detected, preventing it from reaching any sensitive components on connected devices.

When these brief but intense increases occur, they can cause damage to expensive machinery such as air conditioners, tools for construction sites, refrigerators, laser printers, etcetera causing them to malfunction prematurely due to increased wear down of moving parts which over time causes irreparable damages that would have been easily avoided with the use of this valuable product!

A sharp sound is usually enough to fry your brain, but the effects of a spike can be much more extreme. They last only fractions of seconds but carry thousands and volts with them.

Spikes are commonly caused by storms or power line malfunctions like downed trees that cause shorts on lines, resulting in surges or spikes damaging electronics beyond repair either instantly or over time.

Surge protectors, also known as surge suppressors, absorb and channel damaging excess voltage away from devices connected to them.

However, when they are fully charged with electricity, their capacity is reached, so the equipment isn’t protected anymore, and you need to replace it before anything happens.

Between a basic power strip or multiplug adapter and the surge protector, there is no contest. Power strips offer additional outlet space but do not protect from surges.

To identify if an item provides adequate voltage/surge protection, you need to look for ratings on the packaging; anything less than 1000 joules doesn’t qualify as sufficient defense against electrical spikes in your home’s wiring system.

Now that you understand what a surge protector is and how it works let’s dive into choosing the best one.

Plugging a surge protector into the outlet isn’t enough to protect your devices from electrical spikes or surges.

Furthermore, not all power strips are also considered surge protectors because they don’t feature any of these lights labeled “surge” or “protected.”

If you’re blindly plugging in different types of cords without checking their labels first and suddenly find that one’s surged while another has been protected—as well as if there is no light at all when plugged in—then it may be time for an upgrade!

People should be careful when buying surge protectors – they need to make sure the device has an Underwriters Laboratories logo (UL) on it or that the title of TVSS appears somewhere.

UL is an organization that tests electronics for industry standards and will only certify devices with their seal if these safety levels are met. Some people might not want to buy generic brands because this can lead them down a dangerous path!

Some people may wonder about the difference between a surge protector and a power strip.

The only benefit to purchasing a power strip is its slightly lower price. However, you’re still sacrificing quality for affordability in that case because most of them break faster than they should, so it’s not worth saving money on something with such an obvious downside.

In the event of a power outage or surge, your essential data and devices will be safe with an Uninterruptible Power Supply.

This device has two modes – battery backup mode, where it supplies uninterrupted power to all connected electronics in case there is no electricity coming from the outlet while simultaneously storing energy in its internal batteries for any time when unforeseen emergencies occur; and utility mode, which switches back over automatically to conventional AC if sufficient voltage returns at whichever moment arrives first.

One of the most important considerations when buying a surge protector is how many outlets it can provide.

If you’re connecting an entertainment system or home office, make sure to purchase one with enough spots for all your devices and extras if you want to add more down the line!

You might not know, but the number of outlets on surge protectors does not automatically mean that you can plug in all your devices. Some power adapters are so big they block nearby outlets, and some have larger than standard plugs, which don’t work with smaller sockets.

That’s why it is essential to make sure there are enough spaces for any oversized adapter and a sufficient amount available for other chargers or laptops.

When looking at different surge protection units, remember to calculate how each device will use many electrical ports before purchasing!

When the power goes out, it’s easy to think that surge protectors can only be used with things like power lines.

But dangerous amounts of electricity are also flowing through phone wires, cable lines, and ethernet cables. Many surge protector models have in and out ports for all these types, which means your devices will always be safe from surges–no matter what happens!

Note that surge protectors often come with warranties to repair or replace devices in the event of a power surge.

However, it can be difficult to definitively prove if your electronics were damaged by an external source and not covered under warranty – such as damage caused by overuse or misuse- so manufacturers are understandably hesitant when inspecting claims for this type of electronic device.

The process involves shipping back your product at your cost and paying professionals who diagnose these problems, which means they don’t make sense on small items like phones unless there is some assurance against loss during transit from outside forces like theft because being without coverage would mean having no recourse should something happen in the future while still owning a said item.

The packaging for your product is essential in conveying information about it. To get the most out of that package, you need to focus on these first:

The number of joules listed for the surge protector represents its energy absorption rating.

Think of it like a shield that blocks excess energy, and higher numbers mean the surge protector can sustain more (or bigger) hits through single or multiple events before wearing out.

So if we have 500 joules of protection on our device with ten 50-joule blows coming in during one incident, then this means that each impact will be absorbed by only 5% percent–this is not ideal!

To be sure your electronics are safe, check the joules rating for each item. To keep your home theater system and a computer running smoothly, make sure to purchase a surge protector with more than 2500 joules of protection.

The clamping voltage—sometimes referred to as the Voltage Protection Rating (VPR) or Suppressed Voltage Rating (SVR)—indicates when a surge protector will activate to divert excess voltage.

The protection offered by joules sounds good, but it’s the maximum clamping voltage that ends up being more effective.

If a 330 V clamping voltage is your goal, then go with Option A instead of Option B, which provides 500 V protection and will allow more surges/spikes before doing anything about them (which can damage components).

The response time (typically measured in nanoseconds) indicates how quickly a surge protector will react to divert excess voltage. While electronics seem to work instantly, they require some amount of time.

Response times go hand-in-hand with the clamping voltage – the higher it is, which means that your surge protectors activate faster and have more power available for diverting electricity before it causes damage.

If you want both quality and speed when choosing an electrical protection system, choose ones with low response rates of one nanosecond or less!

The UL 1449 safety standard regulates every type of surge protector that’s available on the market today.

This certification includes criteria for design requirements and product performance testing, meaning it can be hard to tell if a power strip is safe or not without checking its packaging first.

Be careful that you don’t want to buy a surge protector and then find out it’s not big enough or doesn’t have the right features. Read reviews first, so you can make an informed decision before buying anything!