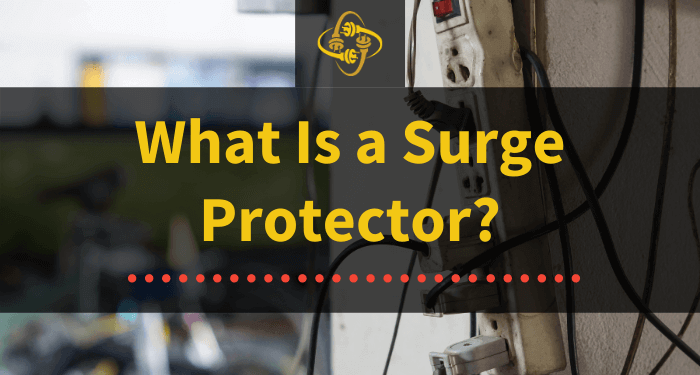 A surge protector is a device that helps protect your electronics from power surges caused by other appliances in your home.

Surge protectors are a great way to prevent power spikes and surges from harming your appliances. What is a surge protector?

A surge protector will interrupt the flow of electricity, absorbing any excess voltage and diverting it away from the appliance. This helps to keep your electronics safe. In this blog post, I will show you how to install a surge protector in your home.

What is a Surge Protector?

A surge protector is a small appliance or device that has two main functions.

Most people know about the first function, allowing you to plug multiple components into one power outlet. The second important function of this gadget is protection for your electronic devices such as TV systems or computers from high-voltage surges.

A spike in voltage may be caused by faulty wiring at home, but it can also happen when someone drives over an electric cable; either way, these spikes have dangerous consequences like burning out electrical appliances fast without proper damage prevention measures like installing a surge protector!

The function of a Surge Protector

A surge protector is a small appliance that has one primary function. The first and most important for the average user, protecting from an electrical power spike or sudden increase in voltage above the designated level of electricity flow to your electronic devices like TV systems and computers.

These spikes happen when too much energy tries to go through a wire at once-a little something called “overloading.”

This can be caused by anything from stormy weather over time causing electric surges, glitches with smart meters measuring how much you use on any given day (by monitoring usage, they try to stop people who are gaming this system), faulty wiring inside buildings because it’s been installed incorrectly due to shoddy workmanship–it all adds up!

Difference Between a Surge and a Spike

When the voltage increase lasts more than three nanoseconds, it is called a surge. When the spike only lasts for one or two nanoseconds, it’s just abbreviated as “spike.”

That difference may seem trivial–one billionth of a second? But those tiny fractions can inflict significant damage on machines if you’re unlucky enough to experience high-voltage surges and spikes.

Causes of a Surge or Spike

In a power outage, you will want to know your company’s emergency response procedures.

One common cause for an electrical blackout is lightning; however, it’s very uncommon and more likely caused by high-power devices such as air conditioners or refrigerators built with motors and compressors, which require lots of energy when switching on/off.

When these “heavy hitters” switch off in buildings without protection, they disrupt voltage flow causing immediate damage if not corrected quickly but can also result in gradual wear over time leading to eventual failure.

Faulty wiring, issues with the utility company’s equipment, and downed power lines are among the most common sources of power surges. But there is hope for a good night’s sleep even when these kinds of mishaps occur – as long as you know what to do!

Within the complex system of transformers and cables that bring electricity to your homes, there are plenty of possible points where an error could cause uneven flow resulting in the eventual surge.

The amount of pressure you put on a hose will eventually cause it to burst. Electrical excesses can also have consequences, such as electrical lines and appliances burning up or wearing down over time.

Surge protectors are the perfect way to ensure your wiring and appliances don’t wear away because they divert too much pressure from those wires for them not to pop out all at once!

How does the pressure from excess electrical energy get diverted? When the voltage reaches a certain point, surge protectors use valves to re-route that extra power.

With standard voltages, current flows through as usual but with spikes or surges in electricity; filters kick in immediately and divert any overage of current to grounding wires.

This is usually done by metal oxide varistors (MOVs) or gas discharge arrestors which allow devices plugged into them to continue operating without being damaged while diverting excessive amounts of power elsewhere.

Surge protection devices are integral to the power grid and your home’s safety. These three different types of surge protectors must be included in any installation: Type 1, Type 2, or Type 3

The type of surge protector you have in your home should be based on what you need it to do.

A whole-house power surge can’t handle 100% surges, but that doesn’t mean they are useless. Small amounts of excess voltage will leak up to 15%. They also don’t protect against the myriad electrical issues within a house from appliances – when an AC or fridge kicks on and off, for instance.

Good as Your Grounding

The best surge protector in the world will not work if your home has improper wiring and grounding.

Older homes with ungrounded outlets or improperly grounded houses should have these issues addressed quickly, as repairing them will be cheaper than replacing fried appliances.

Some of the surge protector device components and features are as follows:

Now you should know more about the voltage of your devices. A transient surge protector limits current and protects against sudden changes in it, like when a power spike happens.

Transient surge protectors use multiple elements such as spark gaps, Zener-type semiconductors (which start conducting electricity once reaching their specific electric thresholds), MOVs—all of these things are used for protection.

Now we will talk about the types of surge protectors for homes. They can be in power strips used inside or a device outside at your home’s electrical panel.

Now, sockets found in modern houses use three wires: line, neutral and ground wire, according to conditions such as lighting where both cable and neutral have high voltage spikes that need to be shorted with the help of grounding wire (ground).

To prevent any damages from occurring while you’re away, it is vital that you invest in one good protector but do not forget its UPS battery!

Surge protectors are a vital tool for protecting your gadgets from power strikes and surges. The electronic device plugged directly into an outlet is susceptible to severe damage during these events due to the excess voltage, so you must have surge protection on hand in case of emergency.

Surge protectors work as they’re designed: They divert excessive energy by sending only small amounts through their circuitry while preventing overwhelming currents or voltages from entering whatever gadget you’ve got plugged in at the time—saving both money and hassle!