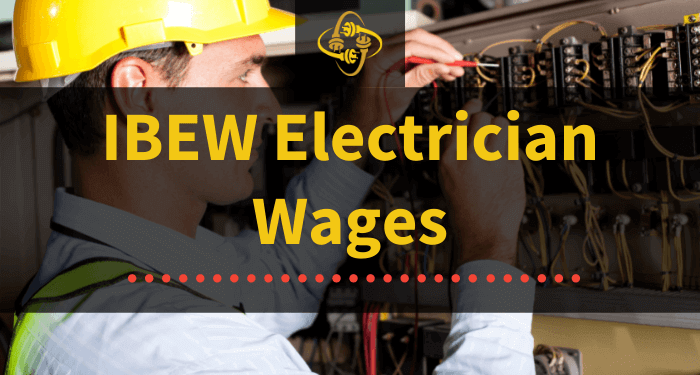 How much does your state of residence affect how you can earn as an International Brotherhood of Electrical Workers (IBEW) electrician? All these questions and more will be answered in this blog post.

After completing your apprenticeship program to become an electrician, you can call yourself a journeyman. Your wages will be well above the average salary of other workers in America with this certification, and it’s all thanks to labor unions like IBEW.

Organized labor unions set rates that employers must pay for contracting qualified electricians at specific locations, which is why having one by your name could make all the difference when searching for work!

The average electrician in Hawaii earns an annual salary of $76,000. Districts are the next best bet for high-paying positions such as this one, while Alaska and New York also rank well on a national scale for wages earned by journeymen workers.

A journeyman is a man or woman who has finished an apprenticeship program and earned the “journey worker.”

Some work in specializations like elevator repair for even more money for highly sought-after skills by companies today.

With a high school diploma or GED, electricians make $59,640 per year on average.

A career pathway includes attending a vocational college to learn about electrical circuitry and entering into the paid apprenticeship program available through labor unions and independent contractors.

The trade skills are acquired after 2000 annual hours of combined classroom instruction and on-the-job training.

To be a journey worker, electricians need training in four or more years. An apprentice might start at $15 an hour, but they are making up to $50 an hour by the end of their apprenticeship!

They can also work independently and do many technical things until they sit for their license exam, which most states require.

As of May 2017, the Bureau of Labor Statistics reported that the median salary for electricians is $26.01 per hour, which equates to $54,110 annually, with half making more and half earning less than this amount; members who belong to a labor union are paid according to their negotiated contractual agreement covering workers in their locale.

Electricians are engineers that work in all sorts of places with electrical wiring or equipment. They typically wear safety gear to protect against burns and electrocution, depending on the environment they’re working in.

Electricians who install wiring at a construction site could fall off a ladder if not careful; similarly, those installing transmission lines often need to withstand weather conditions like rainstorms – this is why electricians’ hours can go late into the evening well as weekends.

Attending a vocational trade school is not the same as going to college. For one thing, you’re unlikely to be paid much unless you are also employed in an apprenticeship program with electricians who need some help carrying and cleaning equipment (usually part-time).

But once you start training for your profession at the apprentice level, pay scales go up each year of experience.

A journeyman who has completed the apprenticeship programs makes a higher salary than an apprentice still in training.

Licensed and experienced electricians have the highest earning potential, according to statistics from 2017 by The Bureau of Labor Statistics. In May that year, top-10% earners made more than $92,690 yearly on average!

States Where Electricians Earn The Most Money

According to the Bureau of Labor Statistics (BLS), an Electrician’s National Average Annual Wage is around $59K-$60k annually. Their corresponding median hourly earnings range from about 10-18 dollars/hour; however, this figure varies state highly by state!

New York is the highest-paying state for electricians, with salaries increasing by 10.3% over the last five years to $78,000 per year in 2018.

The growth rate of salaries has been even starker on islands like Hawaii and Minnesota, which have seen increases of 18% and 24.2%, respectively, since 2013 – a clear sign that demand for these professionals remains strong nationwide!

The top-10 states where electricians make the most money are a combination of Southern, upper Midwestern, and Western States.

To an extent, salaries for electricians mirror that cost of living, with annual wages being lower in these regions than others such as Eastern or Northeastern States.

When you think of low-paying jobs, do the South come to mind? If so, then it’s no surprise that six out of 10 of the lowest paying states are located in this region.

This is not surprising given all these Southern right-to-work laws, which have been a big part of why traditionally industrial and heavy union businesses were essentially moving here over recent decades.

With the increasing need for power, electricians will be in high demand. The Bureau of Labor Statistics predicts that employment opportunities are expected to grow 9% between 2016 and 2026.

This growth means approximately 59,600 new jobs over 10 years with openings available across industries, including electrical lines at alternative energy sources like solar parks where they’ll install wiring into buildings or homes who have a desire to go green!