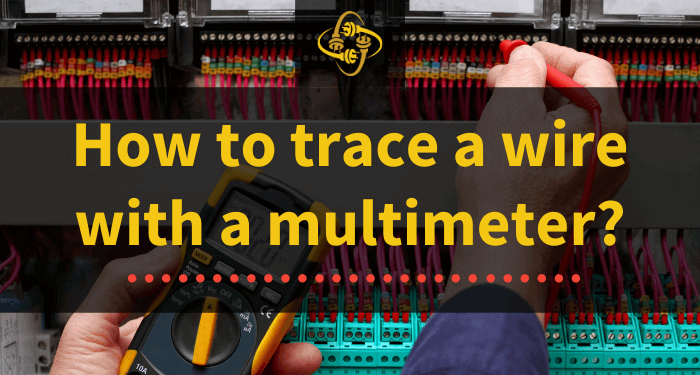 A multimeter is an electrical instrument that has two probes, one positive and one negative.

The device measures voltage, current, and resistance by touching the probes to different points on the circuit (a wire). So how do you use this tool to trace your wires? It’s quite simple!

Have you ever been in a situation where you needed to trace a wire but didn’t know how? A multimeter is an essential tool for electricians, and it’s not uncommon to need one.

In this blog post, we’ll walk through the steps of using a multimeter to find out which wire goes with which terminal on your breaker box.

Start by turning off the power at the main breaker panel. Next, read the labels on each wire (this will be helpful later), and then use your multimeter to test between two wires that are close together. If there is no connection, move down the line until you have found two that make contact when tested.

Over time, wires can become subject to damaging aging. The problem with this is that dry rot and rodent damage are not uncommon in older homes. Loose or poorly soldered wire connections also contribute to breakages as well for more modern wiring systems.

These are the steps to find a broken wire: First, switch off your device. Unlike other circuit tests, you can test it with power from the multimeter! Next, measure voltage and amperage if they’re available. If not, then look for capacitance or resistance values instead.

Finally, turn on your digital multimeter’s “continuity” setting and check for continuity between two different points of interest when testing wires at one end of an electrical connection – such as where they meet in a plug-in outlet or connector block!

Place the black end of your multimeter into the round ground port on the device. Place a red lead in one slotted opening, and make sure they’re connecting to metal for it to work correctly.

If you get a zero reading, that’s an indicator there is no break along this cord; otherwise, keep tracing down until you find where it breaks off from something else, such as another wire or piece of equipment.

After using your multimeter as a wire break detector, you can go about fixing the problem. More often than not, the broken wire will need replacing entirely. You should test any new wires with your multimeter before installing them to check that they’re not also broken!

Some very minor repairs can be fixed by soldering and covering them in electrical tape if necessary-though it’s always best to replace one when possible. Hence, to prevent future issues from happening again.

Continuity is the ability of a wire or an electronic component to carry applied voltage or current through a circuit. Some circuits intentionally use diodes and resistors to shunt the flow of voltage and current through it, preventing electrical shorts that could render said circuit useless.

Suppose you suspect one bad cable has created your malfunctioning piece of equipment. In that case, digital multimeters are handy tools for testing lines in different modes- including volts, amps (current), ohms (resistance) -which can be quickly done. With this handheld diagnostic tool!

Unplug the device that will be tested out from its electrical outlet or voltage supply.

If the multimeter has a specific “Continuity” testing mode, switch it to that setting instead of Ohms.

To find out if an electrical wire is good, hold the negative end of one and positive another. If they read “0,” then it’s bad.

The wires should be tested in a specific way to narrow down the location of which wire is faulty.

It’s essential to know how wires can become worn and damaged, even break. If they do, that could be a safety hazard because it would render the circuit useless or dangerous! A multimeter is an easy way to find where the wire has broken in by performing a continuity test.

Once you found out which side of the broken wire was touching what isn’t working anymore (if it’s not one complete loop), then all you have left to do is repair them or replace them with new ones, so your electrical circuits are safe. Again!!!

One of the most common sources of a broken wire is accidents. They can happen anywhere, and they often lead to unexpected consequences.

For example, when you use your car’s electric windows while driving it – if one window is up entirely, but the other has been halfway down before being raised again.

Then this will put stress on that connection point between wires which might result in an interruption in the power supply as soon as the current disconnects from its counterpart inside the insulation (since there is no longer any space left). A better idea would be rolling both windows back down before attempting anything else!

To fix a broken connector, you have to know where the tour wire is connected. After disconnecting it from your device or wiring harness, turn on your multimeter and set it for ohms (resistance).

Place one probe against each of the metal terminals that connect wires; if there’s an improper connection which can be seen as shaking causes changes in resistance readings, replace these connectors with new ones before reconnecting them into place.

The reading displayed on your multimeter screen should be zero. If it’s not, consider the placement of your wires to make sure they’re making good contact with both probes.

Make sure you have an alligator clip on each probe so that if there is any breakage in your wire, then at least one side will still show a resistance value for you to measure against

Place one pin on the remaining side of your wire that should not have any breaks while placing another probe at this point with all its doubts after having set it up correctly using both sides through insulation so they won’t come into contact with each other.

If neither will work well enough to detect faults or cuts since their resistance values are different from what would be expected without coming across anything wrong, make sure to keep them insulated still just in case by wrapping wires together tightly before inserting them back inside an extension cord.

Running jumper wire is a great way to bridge any short your wires might have, but it can get complicated.

To make sure you do this correctly, just follow these easy steps: First of all, use the ends closest together and wrap one end around each probe with about an inch spacing in between them (don’t connect both probes).

Next, hold down on the chassis ground button until you see the continuity test flashing again. Now pull back up before continuing!

To keep yourself safe and healthy, make sure to cover the open spots on wires with electrical tape. This will help keep moisture away from your wiring, which could lead to electrocution because it’s better than risking getting hurt!