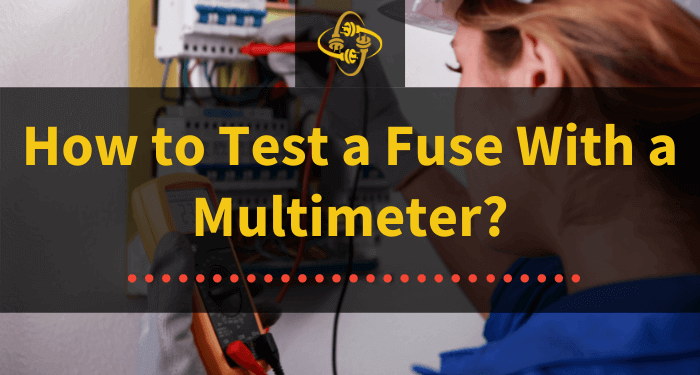 A fuse is an essential and necessary component in any electronic application, so you must know how to test them.

One way of testing a fuse is by using the ohmmeter function on your multimeter (which will tell us if there are spikes or surges). It’s also good practice to check its resistance because it indicates whether current can flow through it correctly.

Fuses are an essential part of the electrical system in your home. They can be a lifesaver when they work correctly, but it could lead to some significant problems if one blows out.

Testing a fuse with a multimeter is not all that complicated, and you might find that it’s worth doing before installing new fuses just in case there’s something wrong with them.

First things first, make sure you have the correct type of meter for testing fuses. You’ll need one that has both AC and DC settings, as well as voltage, ranges from 200 volts to 600 volts or more depending on what kind of fuse you’re testing.

Reasons To Test a Fuse

When a fuse blows, it’s always an unpleasant surprise. Fortunately for most of us, we know how to replace the blown one and get back on our way as quickly as possible.

Some fuses are pretty pricey, though, which means if you don’t have any replacements handy or nearby, then it will be necessary to make that awkward trip to your local auto parts store or home improvement center!

As someone who has had many years in this profession, I can tell you from experience these things happen fairly often; so being prepared with some replacement fuses that may work is not just good practice but also pretty essential when out and about – especially since they’re usually relatively inexpensive compared other repair services like car maintenance.

If you notice that your lights have gone out, it is always best to test the fuse first before going on a wild goose chase for new fuses. Testing a fuse also saves money and time!

The most economical way of testing whether or not your home’s electricity has been affected by an electrical issue like a blown circuit breaker is with something as simple as lighting up one light bulb in the room where these problems are occurring.

A fuse is a small piece of wire that burns in half when an electric overload occurs. When this happens, we can usually tell by the way it sounds if there’s still some electricity running through its metal casing or not.

But because fuses have tiny windows with small wires and they’re often hard to see inside their casings without really looking closely at them for long periods, sometimes you don’t know whether your house has been disconnected from all power sources yet while testing one last thing up against the wall socket as soon as possible after shutting off any nearby circuit breakers first!

And so what I recommend doing before jumping back on earth would be to take 30 seconds out now and then during these tests every few minutes (or even more.

Why does a fuse blow?

A fuse protects the circuit from a higher current than it can handle. If you’ve blown your fuse, there is likely an issue somewhere in between two wires or with power and ground (car body).

A fuse also blows if something draws more electrical current than what’s allotted for its function – like when a wiper motor jammed while on will pop the fuses due to drawing too much electricity.

The same can happen if a winding is shorted inside the motor. We noticed some common problems that cause blown fuses in many cars:

Testing a Fuse Using a Multimeter

A multimeter is an electronic device that measures voltage, amperage, and resistance. It’s like a continuity tester but does so much more!

Some meters come with different settings to measure the three variables in several ranges of accuracy – some are digital while others have dials (needles) for analog readings.

Regardless of what type you’re using, most models will start by measuring resistances or Ω first before any other measurements can be made.

Different ranges are available to choose from on this dial (K means thousand, so 2K equals 2000) – usually around 200.

If the readings show 1 ohm or less, then this fuse is good; if it’s blown and you read infinity instead of a low reading with your continuity tester, try again by re-wiggling the probes on both contacts until they make contact properly.

Find a Multimeter that Can Check the ohms.

Make sure you have a multimeter that has resistance so you can check the ohms. The ohms will tell you if the fuse is open and blown or closed and working!

Set the Multimeter to 20k

The ohms setting on the multimeter is a measure of electrical resistance. To find it, switch your device to 20k and look at the dials for what they are placed around.

Confirm the testing probes are plugged in to measure how many ohms.

With the multimeter reading near 0, there is little to no resistance. When you press the tips together, and it reads 1 or 100%, then this means that your leads are good!

For best results, be sure to find a non-metal surface before proceeding.

To ensure that the multimeter does not overload, please remove your fuse from under the hood before testing.

While the fuse may look fine on the outside, it is crucial to check for a broken wire inside. If there are any cracks or breaks in that wire, then you will need a replacement!

Test the Fuse with the Testing Leads

The multimeter is a helpful device for testing if a fuse has blown or not. Place one probe on each end of the fuse, and it should read close to zero ohms unless that vehicle is over 30yrs old!

If you’re unsure about this measurement, then test both ends by touching them together with your probes – if they are at ground potential (0V), there’s 100% resistance in the wires from where you touched back to their respective terminals.