Skip to content
May 24, 2021 May 24, 2021 by Blake Sutton
We are committed to researching & testing the top products for you to buy. Some of the links in this post are affiliate links, and we may earn a commission on purchases made (at no extra cost to you) 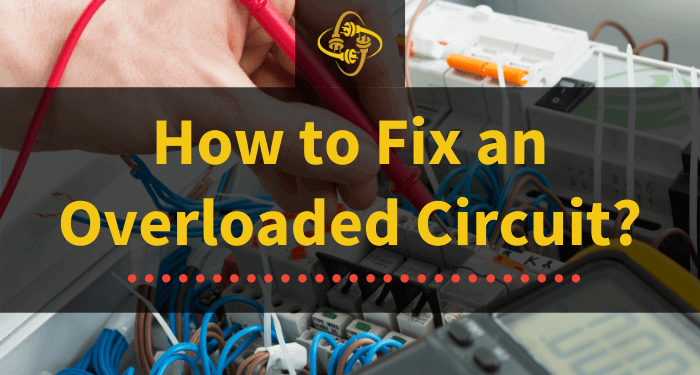 What do you do when you overloaded circuit trips? It’s not uncommon for someone to have a circuit breaker tripped, but where does the problem lie? Is it just the breakers, or is there something more sinister lurking in your home wiring system?

How can I tell if my overloaded circuit is caused by an electrical issue or an appliance overloading the outlet? If you are experiencing this trouble, there’s a good chance that one of these two things has gone wrong. Let’s explore how to fix each one!

As electricians, we see these types of problems all the time when homeowners don’t know what they’re doing – not that there’s anything wrong with being a homeowner! That means we’ve got some tips for making sure this won’t happen at your house (again).

Every socket in your home is connected to the breaker box. There will be a limited number of sockets on each circuit, and the exact amount will depend on what you plug into it; commonly, this will be 15 amps or 20 amps, depending on how many items are plugged in at once.

This safety feature will protect your wiring from overheating and causing a fire. It’s essential to keep in mind that if circuits overload, wires are hot – the plastic coating can melt, leaving them vulnerable to short circuitry or electric shocks!

What Is an Electrical Circuit Overload?

Electrical circuits are designed to handle a limited amount of electricity. Each circuit can have many devices plugged in and running simultaneously, but each device adds some extra load on that specific power line.

Suppose you exceed what your wiring for the particular circuit is rated for. In that case, it will trip and shut off all current flow through the breaker or fuse, depending on whether you’re using old wires with fuses vs. newer ones with breakers (too much electrical usage).

The circuit breaker is the protector that saves us from a fire. If there were no over, an overload would cause the wiring to heat up and eventually melt into a big mess of metal wires with insulation on them.

Different circuits have different load ratings, so for example, some can provide more electricity than others, but that doesn’t mean you should plug in too many devices at once because your home’s electrical system was made around typical household usage, which means they’re not designed to handle as much electric voltage or amperage as other systems could do what you want it to without shutting down completely!

So if we know where our house’s circuits are located, then we’ll be able to tell when one has overloaded before any severe damage occurs – saving time and money.

The most obvious sign of an electrical circuit overload is a breaker tripping and shutting off all the power. Other symptoms can be less noticeable:

Dimming lights, significantly if your light dims when you turn on appliances or more lights – it might mean that something in the house needs to use less electricity, so there’s enough for everything else.

Buzzing outlets or switches may indicate loose connections where wires are touching each other inside walls because they’re worn out from too many plugs being unplugged over time; this could also cause short circuits Plugs with scorched cords should not be used until their wiring has been checked by professionals unless replacing them outright becomes necessary-it requires extensive work due to how deep into walls these cords go.

A circuit breaker is an electrical safety device that automatically cuts off the power to a home’s circuits when they start drawing too much current. It has two different types of switches: dedicated and general-purpose (they can serve multiple rooms).

This gray metal box contains only one type, but it does have its work cut out for it! Dedicated breakers are used in kitchens or laundry rooms that require more electricity than other house areas; these appliances such as your furnace or gas range would be connected to these breakers because they’re significant draw devices.

General-purpose breakers may also be installed throughout your entire house so you can plug into them if there’s ever an emergency with getting power back on again!

To make the most of your time, you will need a floor plan to guide you. A map is taped on your electrical panel so that tracing each room and outlet becomes easy. However, it’s essential not only to identify which dedicated circuits are in use but also those general-purpose ones!

It’s essential to have an excellent working knowledge of your home electrical system so that you can quickly fix any problems. If there are circuit breakers or fuses, be sure to turn them off before doing anything else and then check for any loose wires in the area where they were installed.

Remember to keep an eye out on how old all of these components may be, as this will give insight into what might need replacing next time one breaks down again!

If you think that your home’s circuit has been overloaded, make sure to check the breaker box and find out which switch is turned off. Do not turn it back on yet! Once you know what circuit tripped the breaker, unplug all of its cords and any lights plugged in with them.

Then try turning on that same circuit again–hopefully, this will work now without a problem! If one appliance causes another to trip (and by extension cause an overload), there could be something wrong with either or both devices, so don’t forget about those other plug-ins when checking for faults as well!”

Check this, plug the appliance into a different circuit and see if it makes an extra breaker trip. If so, you may have an overload problem or another potential issue with your device that requires investigation from someone other than yourself to get things back up and running again.

Make sure to contact Electrical Services for more information on what might be going wrong so they can help you out as soon as possible! You can look at each appliance on the circuit and make a note of the amps it draws when in use.

It should then be possible to add these figures up; if they total more than your breaker’s value, you can overload that part of the system- but always apply for an electrical permit from the local building inspections department before undertaking any project involving electricity!

The permit ensures proper technique is used during installation and safety measures are taken while doing so and requires analysis before deciding whether or not this home has enough amperage capacity for all its appliances.