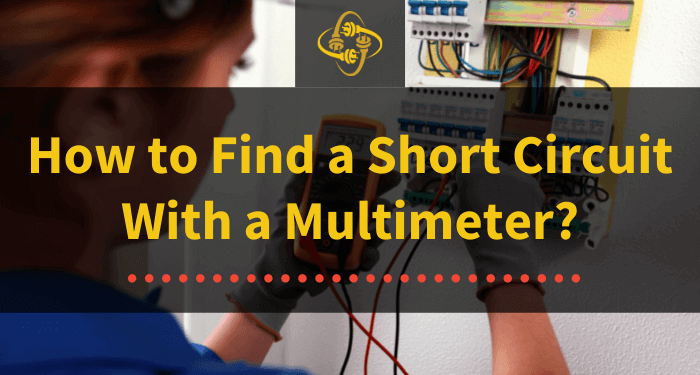 A short circuit is a condition in an electric system where current flows from one part to another without passing through the load.

If left uncorrected, a short circuit can create severe problems for homeowners and businesses. Luckily, you don’t need to be an electrician to find this problem with a multimeter!

If you have a multimeter, then this is the easiest way to find any short circuit. The multimeter has two probes, and if you hold one probe in each hand, it will light up when there is a short circuit.

What Is a Multimeter?

A multimeter is an essential tool for any electrician. It measures AC and DC voltage, current (amperage), resistance, capacitance, and inductance, in addition to many other functions such as checking continuity or using a signal generator to test an electronic device’s frequency response! A VOM takes all of these measurements at lightning speed with accuracy on par with your eyesight.

Donald Macadie was an engineer who worked for the British post office. He came up with a multimeter that would measure amperes, volts, and ohms so he wouldn’t need to carry as many instruments about his work in telecommunications circuits.

Its original name now knows the meter of the Avometer because it measures both amps, volts, and ohms (AVO). Nowadays, there are two types of standard meters – analog meters that use hands or needles pointing at various positions on an indicator dial to show measurements; digital gauges display numbers digitally using LCD screens instead.

An analog multimeter with a moving needle is the most common type of meter. It functions by utilizing an ammeter, which measures current in circuits and displays readings on its small screen through a microammeter-sized version of an ampere (amper) gauge that moves as electric charges pass from one end to another.

This simple device shows voltage levels or currents depending on what function it’s set up for – you can even use it to measure frequencies!

A digital voltmeter also has this capability but instead utilizes numbers rather than needles; when used correctly, they give accurate measurements of measurements due to their accuracy rate being within a 1% deviation range at 20mA input impedance level.

Various reasons for a short circuit commonly known are:

Once you have suspected that you have a short circuit problem, you can follow an essential procedure to identify the problem’s location.

Here, you can either use a digital or an analog multimeter to measure resistance, voltage, and current.

How To Find a Short Circuit with a Multimeter

The first step to finding a short circuit is looking for physical signs. This may include visible burns or metal on wires, burning smells, and flickering lights.

Once you’ve identified a possible short, use your multimeter in the resistance setting to confirm voltage levels by checking them against what they should be (in this case, 0). If it’s lower than expected, then that means the current has been diverted away from an area where there might be one!

After you’ve confirmed the short circuit source, make sure that you shut off the power to the electrical circuit by turning off one of your circuits. You should switch from the resistance setting on your multimeter and insert metal probes into a problem receptacle or switch.

Your meter will show zero volts if there is no current in this part of an electric system; however, it could still be running through other parts, so always check with another breaker first before assuming everything has been turned off!

Now that there’s no power in the electrical circuit, you can switch your multimeter to ohms and check for continuity. If it shows infinite ohms or OL, this breaker has probably been tripped from too much current flow, causing a short-circuit, which requires accessing the main panel and replacing it if found faulty.

If the multimeter shows continuity, there is a short circuit. This could be caused by an incorrect breaker setting or wire fracture and can often be fixed by replacing receptacles and switches to ensure they are not faulty.

If you still get a reading on your multimeter after doing so, check all wires for bare copper that may touch each other at some point in time- this will cause another fault if it happens again!

Today, we increasingly depend on electricity to run a lot of things in our home. But with most things, you’re likely to encounter problems with your electricals.

For some people, the first step is to call an electrician, which will undoubtedly solve their problem- but for those who don’t want this hassle or expense and are somewhat skilled themselves can take care of it themself!

But for others, such problems offer an opportunity to put their electricity knowledge to use. Thanks to the growing availability of multimeters, you can easily find one and address the problem before it even worsens.

Take time to find a high-end meter that suits your needs if you plan on using this device for advanced tasks, as these types come with great features, including Bluetooth connectivity.