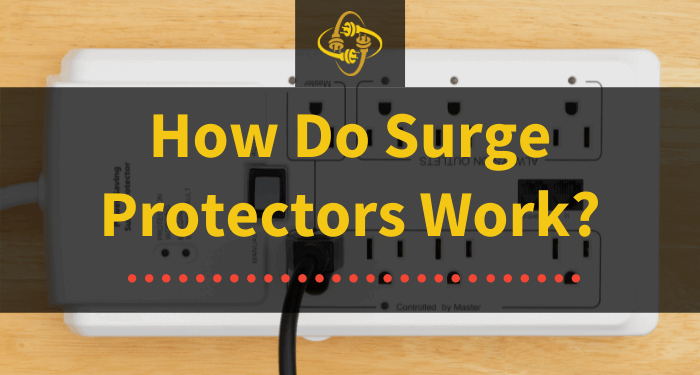 Surge protectors are an essential component of any electric system. We often think that when a power surge happens, it’s the destruction of our electronics or appliances, but this is not always true!

In most cases, power surges only cause minor damages to your equipment and appliances. However, these may still be costly to repair.

Surge protectors are designed to safeguard your electronics from power surges. Let’s take a closer look at how they work and what the best surge protector for you is.

A power surge can be deadly, and that is why a surge protector is your best friend. A sudden increase in voltage from 120 volts to 250 volts will not only fry the circuits on your computer but could also start an electrical fire!

So make sure you have one of these lifesavers plugged into every outlet near electronic devices – it protects all of them without costing much money or time to use.

The voltage of an electrical system is a measure of the difference in electric potential energy between two points. This means that one end has more power than the other, so electricity travels from point to point because there’s a higher pressure on one end and less elsewhere.

The same principle applies to water under pressure – high-pressure hoses have greater force behind them as they push out low-pressure ones. You can think about this like voltage being akin to your blood pumping through you with different pressures going down each vein.

As we’ll see later on, various factors can cause a temporary increase in voltage.

A surge or spike in voltage can be damaging to a machine. What happens is similar to what would happen if you applied too much water pressure on the hose. It will burst and may not work correctly anymore.

The same thing goes for electrical machines when there are surges of high-voltage coming through them — they heat up like filaments in light bulbs until eventually burning out entirely from all that stress over time.

Surge Protectors: How does it work?

Surge protectors work by diverting extra voltage to the grounding wire inside it. It usually handles this process of switching over a surge protector when there is too much excess power in your home. Some device within the unit takes care of that for you to focus on enjoying yourself while using all those electrical devices!

It sounds simple, but it makes all the difference in the price for these devices. Three factors differentiate the level of surge protection and the cost:

A lower value here is better. This basically at what voltage the diversion will kick in. 330 V is an excellent soft value, whereas 500 V would fry your electronic equipment before it could divert a spike due to its high amount of volts at a time when you need power most- during a storm or outage!

This rating tells you how much energy the surge protector can absorb before it burns out. It’s given in joules and ranges from 200 joules for fundamental protection up to thousands of joules.

An excellent way to find the best surge protector for your devices is by looking at how long it takes before a power surge kicks in. The shorter this delay, the better.

Some types of surges can kill an electronic device after about three seconds, and if you have one of these protectors with a longer response time, then there’s no guarantee what will happen once it starts going off on its own. You also want to make sure they’re equipped with indicator lights when something happens like frying or not being able to function anymore.

Protecting Yourself With Surge Protection

If you want to save your expensive equipment from lightning or power line surges, there are a few things that need to be done. First, note that these will require calling for assistance with the electricity company as well.

You may not know this, but when your power first comes in from the lines outside of your house, it needs to be grounded. If there is no grounding on that box, any surges will flow into and fry up everything inside! You can have a free test done by calling your company or upgrading if they offer services in those areas.

The best situation is when your house never gets struck by lightning. You can do that with a lightning rod: you have to get it professionally installed on the top of your home or in other locations and ground everything down into one place.

The only problem? Lightning rods are expensive–you’ll probably have to order them online before they’re delivered for an installation at an additional cost from professionals who know what they’re doing!

But hey, as long as there’s no danger (or having to unplug all appliances), this little investment could save you thousands of dollars in repairs later on if someone catches their electrician outfit on fire during those dry summer months we always seem to be getting hit with lately.

This is what I had mentioned above. This could be the third defense against surge protection or a first defense if you can’t or don’t want to spend the money for #1 and #2.

This is your final line of defense. You can buy Ethernet surge protectors, coaxial surge protectors, and more! Remember to have them at all points in the house because they won’t work if they don’t go through the primary power source.

Surge protectors are a necessity if you want to protect your valuable electronics from surges. They provide practicality by opening up additionally available outlets for devices such as refrigerators, laundry units, and dishwashers; however, they can also save money when used on multiple electronic appliances with a flick of the switch only!