Skip to content
March 21, 2022 March 21, 2022 by Blake Sutton
We are committed to researching & testing the top products for you to buy. Some of the links in this post are affiliate links, and we may earn a commission on purchases made (at no extra cost to you)

Dual fuel generators thrive during emergencies (i.e. shortage of gas, increased gas prices, etc). In fact, it allows you to use both propane and gasoline to continue giving you the power to keep your appliances running.

The best dual fuel generators are nice and quiet, have a large tank capacity – and of course, have a HUGE power output.

On the other hand, a bad dual fuel generator is nothing but an expensive noise-making machine (don’t get me started on freezing engines or motor gas leaks).

To help you separate the good from the bad – we’ve reviewed the Top 7 Dual Fuel Generators in 2022.

Buy with the confidence that you’re buying one of the best dual fuel generators on the market. Let’s get straight into the reviews. 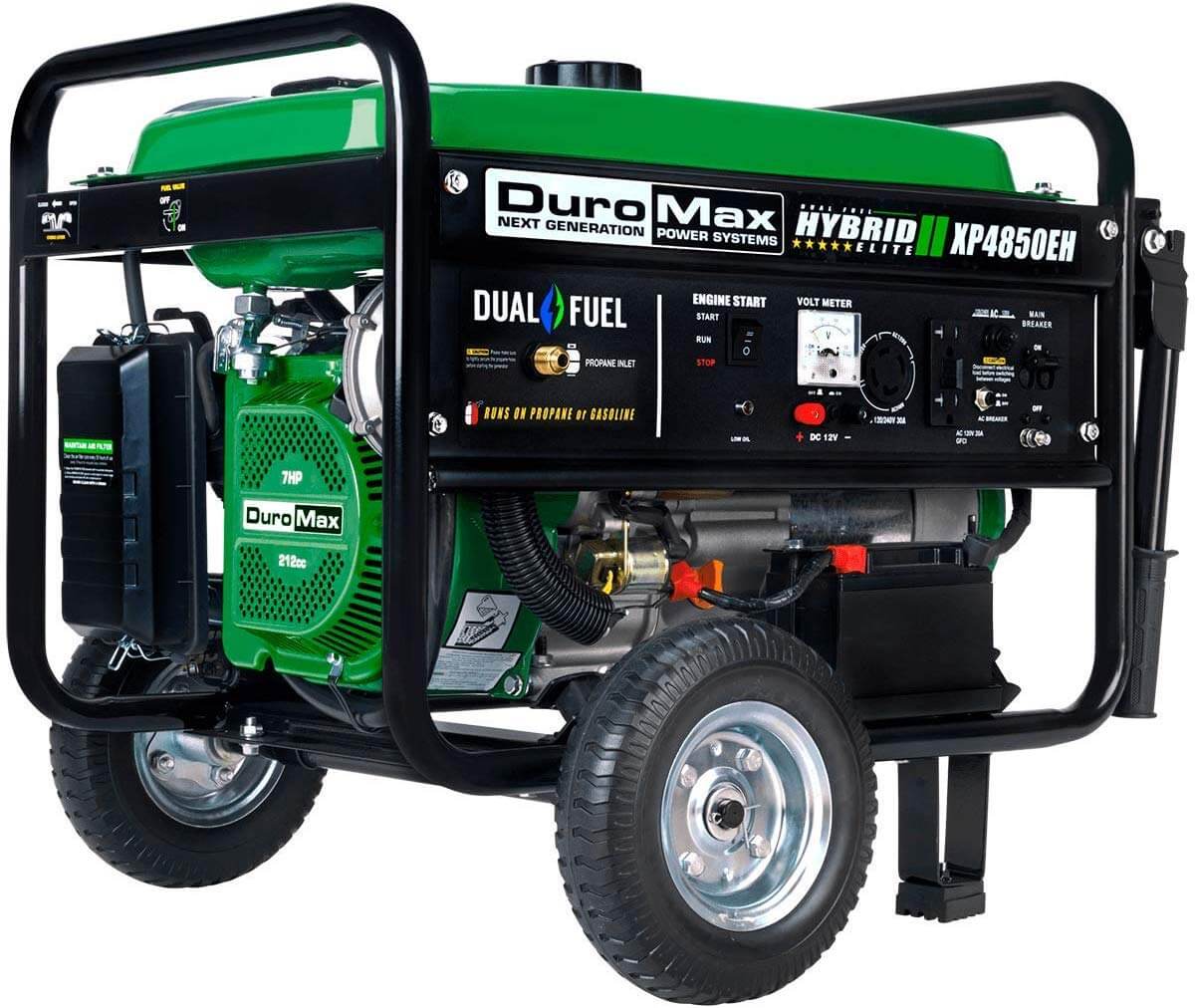 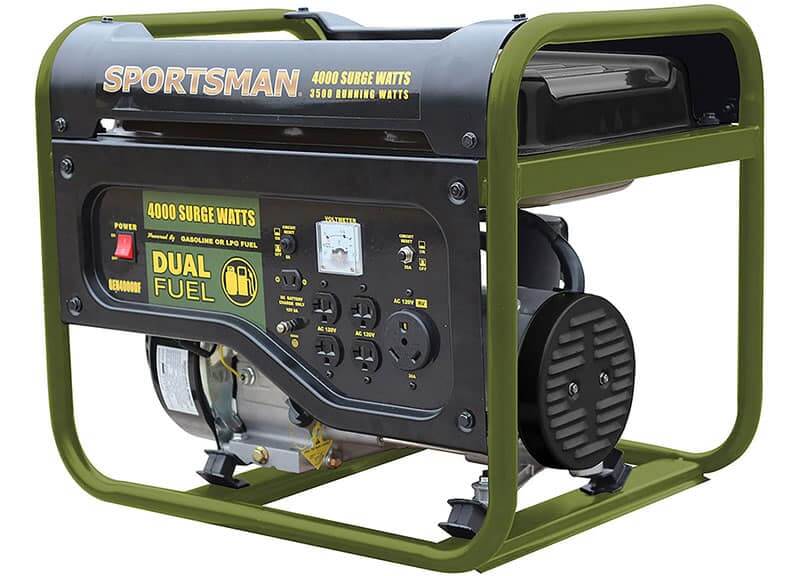 As its “dual fuel” moniker suggests, the Duramax Dual Fuel Generator accepts both propane and gasoline as fuel. Gasoline is cheaper and is more commonly available. However, propane has a longer shelf-life and burns clearly. Duramax has a 20 hour run time average when using propane, and 8 hours when using gasoline.

For users that don’t like to manually start generators, this is the right device for you. The Duramax Dual Fuel Generator includes an electric start for quick startups. Just in case the electric start goes out, there is a pull-start that can be used as a backup.

Generators tend to make running noise, there is no getting around that. However, the Duramax Dual Fuel Generator is tolerable because it only produces 69 dB of sound. This is equivalent to normal human conversation, which isn’t bad for a generator of its size.

Once the generator is turned on, it operates at 3850 running watts and 4,850 max watts. This is a considerable amount of power, which is good for covering home appliances during power outages. For instance, full-sized air conditioning units and even furnace blowers can be powered via this generator making it a great asset during an outage.

Buyers should look into the Duramax Dual Fuel Generator if they want the most utility. With its advertised features, it can supply more power than many of its competitors. It’s a powerful generator that occupies little space but is still small enough to move on its wheel kit.

This generator comes with a fuel selector switch that allows users to switch from propane to gas. It is guaranteed to operate at 69 decibels from 23 feet away. Thus, giving users a silent generator that can keep their appliances operating at full power.

Another feature lies in its push-to-start battery. The battery is an internal charger that continues to charge the device while the generator is running. It also comes with a 30V outlet, and there are a 3 prong outlet and a 30 amp single twist lock. Both outlets come with circuit breakers to keep your equipment protected.

The Champion Dual Fuel Generator has a constant power of 3240 watts and a max power of 4275 watts. The device’s Intelligauge (Hz, hours, volts) enables users to monitor service periods and energy production.

We also appreciated the inclusion of a socket or RVs. Not all dual fuel generators come with an RV socket, which further places the Champion Dual Fuel Generator ahead of its competitors.

The generator can last up to 10.5 hours on a propane tank and 9 hours on a 3.4 gal fuel tank. This makes it a great generator for customers who prize power above all other features in their dual fuel generators.

The Sportsman Dual Fuel Generator is a great option for those needing a budget generator that can use both propane and gas. This generator has excellent build quality, great capacity, and the price is within reach, making it the most economical option on this list.

When it comes to fuel efficiency, The Sportsman Dual Fuel Generator is one of a kind. With a propane tank it can run for 12 hours. When using a 3.6 gallon gas tank, it can run for around 10 hours.

The size of this product is around 2 feet tall and 17 inches long. Users can lift the generator with the handlebars conveniently placed on its sides. Since it weighs in at 90 pounds, the generator comes included with a wheel kit so that it can be moved around with ease.

The generator operates at 3,500 watts (starting wattage: 4,000 watts), you can expect it to run the lights, refrigerator, freezer, and the television. While the power rating isn’t too high, it’s enough to get users through the essential appliances.

Of course, this generator also comes with a few safety features. For instance, it comes with a low oil shutoff feature. It works by automatically turning the generator off when there’s little oil so it doesn’t create a huge accident by drying up.

Also, it comes with a Whisper series muffler which reduces its sound to 74 decibels. While this is louder than the top three generators, it’s still silent enough to work without causing too much of a nuisance.

There is a Firman 0HV engine that improves the generator’s performance. When in use, it provides lower maintenance, extended battery life, and faster appliance use. Thus, making it a good choice for those wanting more utility out of their generator.

However, there are some concerns when you run the generator on propane. Consumers stated that the generator’s engine will die even if there is a substantial amount of propane left inside it.

We like the electric battery that allows users to start the generator at the push of a button. Furthermore, the generator is powered by a large 224 cc engine that’s touch-start enabled. Because of this, users will have a strong dual-fuel generator to keep their appliances operating smoothly.

This generator is also equipped with an automatic shutoff feature for when the oil reaches too low of a level. This can help prevent catastrophic failures and safety hazards.

Build quality is one of the main concerns with this generator, as it’s not made to quite the same standards as the other models we’ve seen so far. Still, it’s a good replacement generator to have if you’re in need of quick appliance power.

The Ford Dual Fuel Generator provides 11,050 watts at peak power and 9,000 watts at effective power. Based on its power rating, users can run plenty of appliances during emergencies or power outages.

It includes four-point isolated motor mounts that help reduce the vibration and sound caused by the motor. This ensures that it provides a quiet and smooth operation whenever it’s in use. Also, it has 10-inch nonflat wheels that allows for more portability, as the generator can be carried to virtually any location.

One tank of gasoline is enough to power the generator for 10.5 hours. With propane, it can operate up to 8 hours.

Watch out for the motor that comes with the generator. After 16 hours of usage, the motor might stop temporarily. If this issue occurs, feel free to call for a replacement. Overall, the Ford Dual Fuel Generator is a great choice if you need a simple generator that can handle light appliances.

Last on our list is the Pulsar Dual Fuel Generator. It features Switch and Go technology that allows the user to switch from gasoline to propane within seconds. This makes it a great choice for customers who are often switching between fuel types.

Another highlight feature lies in its 4 gallon fuel tank. This gives it enough power to run for 12 hours on a 50% tank of gas. With propane, it lasts for 14 hours, giving you enough power to last for a weekend camping trip.

This generator is designed with never-flat wheels and fold-down handles for easy storage and added mobility. As a result, users can carry the generator around without causing too much physical strain. Perfect for the electrician that needs to have emergency power during the holidays.

The power output places it at a disadvantage against the competition. The power the unit produces is either insufficient or not very clean. When in use, the power would not allow the appliances to maintain their batteries. Use this generator as a replacement, as its power might not be able to handle large appliances.