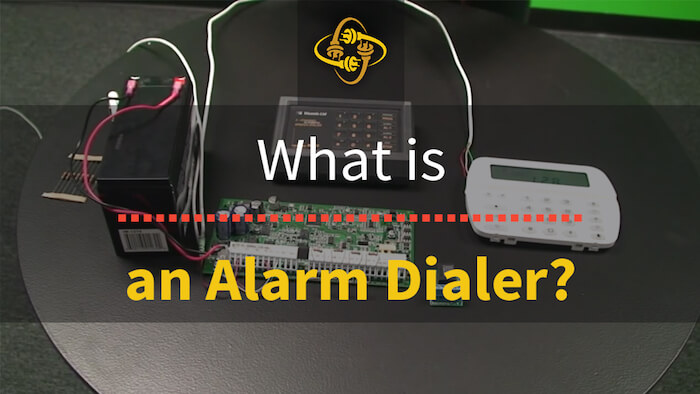 An alarm dialer (or alarm dialler) is an electronic device that automatically triggers an alarm when a predefined condition is met.

This alarm is accompanied by a specific action – such as a text message, phone call, or email – depending on the type of alarm dialer.

Alarm dialers are typically used in emergency and/or production-critical scenarios to ensure prompt action is taken. When an issue is noticed, the problem is immediately communicated so that it can be corrected. Alarm dialers can also be used to log and store any issues or abnormalities.

The naming convention of the alarm dialer depends on the action associated with it. Alarms from automated dialers can report issues by phone call, text message (SMS), or email.

There are three main types of alarm dialers:

Voice dialers will call an assigned mobile or landline whenever a preset condition is met.

Modern voice dialers allow multiple numbers to be called at the same time. They continue to call until the alarm is acknowledged by someone picking up the phone.

Voice dialers are generally used for the most critical alarms since they are a more direct form of communication than SMS or email, giving them a higher chance of being noticed.

SMS dialers will send a text message to an assigned mobile whenever a preset condition is met.

Modern SMS dialers allow multiple numbers to be sent a text message at the same time. Some SMS dialers also have the capability to accept incoming SMS messages, allowing you to give remote commands.

SMS dialers are generally used for critical alarms, similar to the voice dialer. They are a more direct form of communication than email, although not as direct as a voice dialer.

Email dialers will send an email to an assigned email address whenever a preset alarm is triggered.

Multiple emails can be sent at the same time (and often are). Email dialers are primarily used for non-critical alarms – alarms that do not require immediate action. They are also commonly used for data logging purposes.

Purposes of an Alarm Dialer

By having an alarm dialer in your home, all your in-house alarms for the maintenance of your living space will be hooked to an automated system. You are alerted through email, telephone, or SMS whenever a unit needs repair or if there are any issues.

Many alarm dialers also allow for the relaying of remote communications. This allows you to make minor repairs while you’re away from home.

Homeowners sometimes opt for an all-inclusive board where they can monitor alarms, the temperature of their home, plumbing, their security camera system, and whatever other data they collect – all in one centralized place.

It is possible to include all of these monitoring capabilities in one unit – which would include an alarm dialer as part of the package.

There are a huge number of issues that can arise within a manufacturing or industrial plant.

A machine can fault, a valve can get stuck, the temperature or pressure of a machine can be too high – the list is huge.

Some of these issues are more critical than others. For the most critical issues, it is often necessary to ensure the appropriate technician (with the right set of electrician’s tools) is contacted directly. This is where alarm dialers come in.

Depending on the urgency, an alarm dialer allows you to associate an action – like an email, text message, or phone call – with a particular undesirable or dangerous condition.

For example, Bob’s Boxes owns are a factory that manufacturers boxes. The box industry is thriving (thanks Amazon), so Bob wants to be on top of any critical issues that occur in his factory.

Bob has connected an SMS dialer to the junction box which houses the connections to his (famous) box-making machine. If the box-making machine faults, Bob is immediately sent a text message letting him know a fault has occurred. This allows Bob to quickly address any issues that could harm his production.

Usually, the temperature sits between 23-27 degrees Celsius. It’s okay to go outside this range as it’s still within the equipment’s operating conditions – but Bob wants to know about it.

So Bob connects an email dialer to the temperature sensor within the factory. It sends Bob an email whenever the temperature goes outside this 23-27 range. Bob can configure this email to say anything he’d like. He writes the following:

Just a quick note that your factory is outside the typical 23-27 degree range. If you’re not too busy, you might want to do something about it.

Since this isn’t something that will stop his production, Bob doesn’t want to be called or texted.

But he still wants to know about it – making an email dialer an ideal solution. He can also use the dialer for data logging purposes.