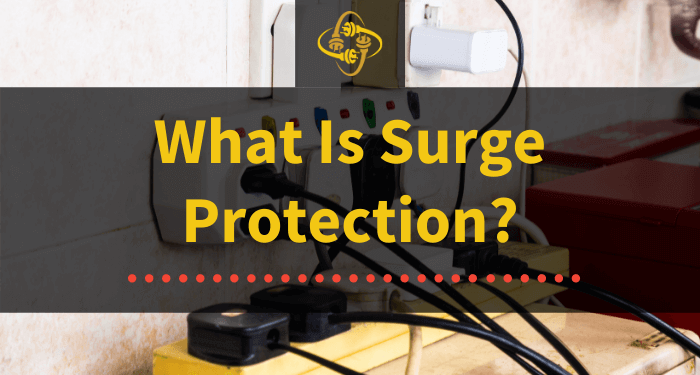 Surge protection is an essential component of all modern electrical systems. It reduces the risk of power surges damaging expensive equipment and appliances, leading to a costly repair or replacement.

Surge protectors are typically inexpensive and easy to install, making it worth considering whether you need one for your home or business.

This blog post will help you understand what surge protection is and how to install it in your home or office.

The most common form of a surge protector is an outlet strip with multiple outlets and built-in voltage-sensitive circuitry that disconnects the power supply from the appliance when there is an abnormally high voltage.

Surge protectors are designed to provide short circuit protection and overvoltage protection against surges caused by lightning strikes, switching operations, nearby substation problems such as wire faults or fallen trees on transmission wires.

A surge protector is a small appliance that has two main functions. The first function it provides is the ability to plug multiple components into one single power outlet.

This saves you from having to use up all of your outlets in an area or needing more than one extension cord for every device plugged in!

Secondly, and most importantly, this little gadget protects your electronics devices like television sets or computers against high-voltage surges, leading them to be fried by electricity overloads caused by sudden changes such as thunderstorms during summer months there are many air conditioning units.

Running at once due to temperature fluctuations creates voltage spikes throughout electrical grids across cities, causing rapid rises in currents within buildings leading to TVs malfunctioning permanently, if not immediately, to protect those expensive purchases.

The function of a Surge Protector

Your devices will work as usual even in the event of power surges. The surge protector contains a built-in circuit breaker that automatically cuts off power to protect your equipment from sudden and dangerous voltage spikes, which can occasionally happen when you’re plugged into an outlet or extension cord with other electrical sources nearby, like fluorescent lights.

A typical surge protector works by diverting any extra electricity flowing through it to ground wires if there is a high voltage present. Hence, they protect all connected electronics and help prevent fires!

Difference Between a Surge and a Spike

That’s all there is to know about these quick bursts of power that can be damaging if they’re strong enough – and you’ll even see them occurring as your computer runs!

Causes of a Surge or Spike

Lightning is the leading cause of power surges in homes, although they are very uncommon. More common causes include high-power devices such as air conditioners and refrigerators that require a lot of energy to switch on and off.

When these appliances turn on or off suddenly due to pressing buttons, it creates sudden demands for electricity, which upsets the steady voltage flow within your home’s electrical system.

This can lead to immediate damages like burnt wires if not protected against lightning strikes and gradual damage over time from fluctuations in voltages levels without protection.

Faulty wiring, issues with the utility company’s equipment, and downed power lines are among the most common sources of power surges.

Within this complex system of transformers and cables that bring electricity to your homes, there is plenty of room for error resulting in an uneven flow – creating a potential for the eventual electrical surge.

Why Should You Have Whole-House Surge Protection?

There are many compelling reasons to invest in whole-house surge protection, and they all begin with the fact that it saves you money.

Modern homes are full of the latest electronic gadgets and electrical equipment. Home appliances now have circuit boards, which need to be protected from surges. New LED bulbs also contain sensitive microcircuit boards and can easily be compromised by an electrical surge.

The amount of personal devices that a household owns has increased considerably within the last decade; computers, pads, smartphones all carry essential information that needs to be safeguarded with professional protection services for your home or office space!

80% of Surge are Generated Internally

Power surges are worse than most people think. Your appliances and electronics will see better days when you don’t have them, for they’ll be able to last longer without power spikes coming from your home’s motors or air conditioners (or any other appliance).

It’s essential to speak with an electrical professional about layering whole-house surge protection, especially if there is an elaborate home entertainment system or other expensive electronic setups.

If one appliance sends out a power surge through shared circuits (ones that aren’t dedicated), the others can be compromised.

This is why you don’t just want a simple plug-in circuit protector – it will only protect your devices rather than addressing the issue at the source of its origins and preventing any future surges from ever occurring on all outlets connected to said device.

A layered system should have connections directly into both your panel and near where those electronics are plugged in for optimum performance and long-term peace of mind!

Did you know that while the primary function of a whole-house surge protector is to protect your home’s appliances and electronics, it also protects the entire electrical system?

When transient surges come from an appliance on a dedicated circuit, they will be sent back through breaker panels, where they are then shunted – protecting all other outlets in your home. A whole-house surge protector safeguards every outlet!

To ensure maximum protection for yourself and any loved ones who may live with you at some point down the line, remember to test GFCIs and AFCIs once per month – 30 days should do it.

When it comes to whole-house systems, there are many different options available depending on your voltage needs.

For homes with 120-volt service that don’t need as much protection from surges (since typical surges are around 50kA), an 80kA rated surge protector will do the job just fine and won’t cost you too much money either!

However, if you live in an area where electrical storms often occur year-round or end up happening more than once per season, then opt for one that has at least half the kA rating of what’s going into your home.

This provides additional safety to yourself and those who may be using any devices plugged into these outlets during stormy weather conditions like power outages.

When you buy an electrician, make sure to do your research and find the best one for what you need. Different brands have different ratings, so be mindful of that when looking at them. Be a smart shopper by finding out about their warranties as well before making any purchases!

Surge suppressors should be used as a matter of habit with all semiconductor-based electronic and computer hardware, including peripherals such as printers, monitors, external disk drives, and modems.

However, it is essential to note that sometimes they can fail during lightning storms, so you need to unplug the surge protector from the main power cord if there are any thunderstorms in your area or else risk damaging sensitive gadgets like computers.